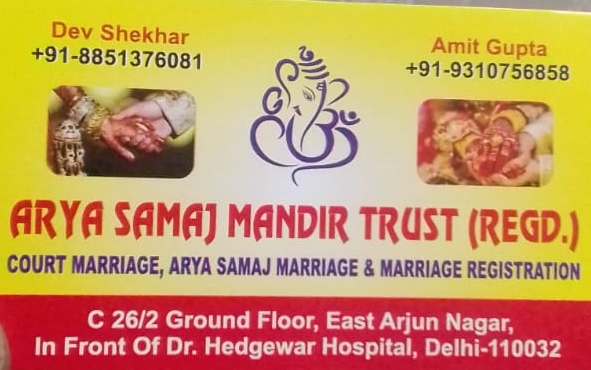 Arya samaj marriage is done under Hindu Marriage Act 1955 and the Arya samaj certificate is full proof of marriage.

ARYASAMAJ Wedding Rituals
1. Varmala - The bride and the groom put garlands or varmala in each other’s neck.
2. Madhupark - Bride gives Madhupark, a mix of honey, curd, and cream to the groom, which the groom drinks it when offered to him for the third time.
3. Havan - The fire in the havan is worshipped, where the priests chant the mantras.
4. Kanyadaan - the father of the bride gives her hand to the groom.
5. Lajahom - In this ritual puffed rice is offered in the holy fire or havan. The bride and groom are supposed to hold hands, while the brother of the bride gives the rice in their hands to offer to the agni.
6. Phere - Couple takes four pheras in front of the holy fire, while the bride prays for the long life and happiness of her husband, and the groom promises to protect, take care and respect his wife.
7. Saptapadi - Couple takes 7 steps together. The 7 steps of this ceremony signify health, wealth, good luck, love, strength, food and offspring.
8.Sindoor Daan - The groom applies sindoor or red vermillion on the bride’s hairline.
9. Ashirvad  - The couple bows down to all the elders to touch their feet and get their blessings.