The process of religious conversion was not a new phenomenon in India. The history of India was a colonial construct, written on the basis of three religious faiths in chronological order. The ancient represent rulers of Hindu, medieval era called as the Muslim rule and the modern era ruled by the British people which stand for the Christianity. 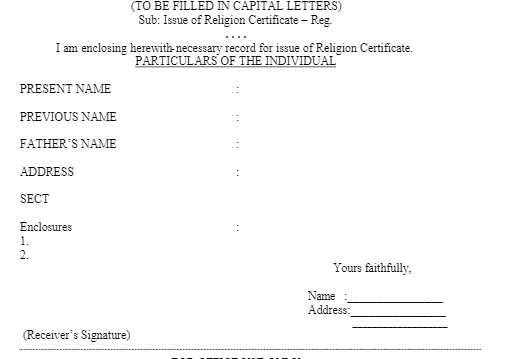 Process of changing your religion in India.
Right to religion is one of our fundamental rights. This is something which actually means that anybody can practice or profess any religion. This also means that you can change your religion at any time in your life. There could be many reasons, of course. eg:  Someone wants to follow different faith or sometimes people might be getting married to somebody of a different religion.

To changing religion in India, the first and foremost important step is obtaining a conversion certificate. Each religion prescribes a different process of obtaining a conversion certificate. Like, for example, if you want to convert to Islam, you need to approach a mosque in your area. Then they'll be performing some religious site and the maulvi will be giving you some certificate. Similarly, if you want to convert into Hinduism, you can approach the nearest temple, after performing certain religious activity, priest will give you a certificate.

Well, after obtaining these  certificate, you need to remember that this is not the only thing which is required for changing your religion. The next step is approaching the gazette of india for declaring your change of religion ( The Gazette of India is a public journal and an authorised legal document of the Government of India, published weekly by the Department of Publication, Ministry of Housing and Urban Affairs. As a public journal, the Gazette prints official notices from the government.).

Once you do this within 60 days, you will receive your notification in the Gazette of India.  You need to take a print of this notification once it comes out and this serves as a proof of it.  Please feel free to reach out to us and we will be more than happy to help you.